King of the Ring


I wanted to talk about an arcade favorite of mine- WWF WrestleFest. I got into the WWF (now known as WWE - World Wrestling Entertainment) around the early 90's. I spent one night at my uncle and aunt's place. Me and my cousins watched a WWF show on TV. I don't remember the exact year, but I think it was the Royal Rumble. My cousins were already into the WWF at the time, but it was something new to me and I found it very interesting. It had controversy, rivalries, even love stories. It was soap opera for guys. It's sports, it's entertainment...It's sports entertainment.

WWF WrestleFest (developed by Technos) was released in 1991. It's a wrestling game (obviously) that features WWF Superstars around that time. The most prominent wrestlers in the game are Hulk Hogan and the Ultimate Warrior. I tend to use those 2 most of the time when I play as they seem to be the most well-rounded wrestlers in the game.

Although there are 12 wrestlers featured in the game, only 10 are playable. The tag team- Legion of Doom (also known as the Road Warriors) is in the game, though they aren't available as selectable wrestlers. They do appear in both modes of the game, so the player still gets the chance to face them.

There are 2 modes of play to choose from at the start of the game. The first one is Royal Rumble (Battle Royal). In this mode, the player selects one wrestler and goes up against multiple wrestlers in the ring. There can be 6 wrestlers in the ring at one time. The goal is to eliminate every wrestler until only one is left standing. Wrestlers can be eliminated by being thrown out of the ring, by submission, or by pinfall (3-count). Once other wrestlers are eliminated, others come into the ring to join the mayhem. 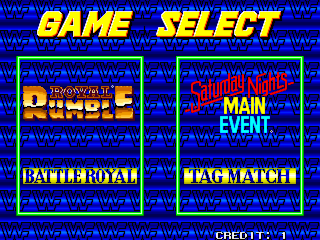 
The other mode is Saturday Nights Main Event (Tag Match). In this mode, the player selects 2 wrestlers to form a tag team. The player goes through a series of tag matches against other teams, the last one being a title match against the Legion of Doom. Although Smash and Crush of the Demolition may be used individually in the Royal Rumble mode, they may only be used together in the Tag Match mode.

All wrestlers have their signature finishing moves such as Hulk Hogan's leg drop and Jake "The Snake" Roberts' DDT. These moves can only be done when the opponents have low or no energy in their life bar.

﻿
WWF WrestleFest is one fun game, more so if you're into wrestling. It has an awesome lineup of wrestlers (the addition of the "Macho Man" Randy Savage would've been nice though).  Its simple control scheme adds to its charm as well. The game only utilizes a joystick and 2 buttons, and yet there is a lot of variety in the moves that the player can execute. As far as arcade wrestling games go, WWF WrestleFest is, in my opinion, (to quote Bret Hart) - "the best there is, the best there was, and the best there ever will be".