It has been over a month since the new Batman movie (The Dark Knight Rises) came out in theaters. I've been a fan of the Batman movies ever since I saw the 1989 movie - Batman. Its sequel, Batman Returns (1992), was my favorite Batman movie and still kind of is. Anyway, I've mentioned those movies because they are related to the game that I will be talking about in this post. That game is Batman Returns for the Super NES.

Batman Returns is a "beat-em-up" that is based on the movie of the same name. The beat-em-up genre was popular during the 80's and 90's, especially in the arcades. These games consist of players going through a number of stages while beating up a group of enemies in hand-to-hand combat, and sometimes with the use of weapons as well (bats, clubs, etc.) . In most games of this type, the player faces a boss at the end of each stage. Gameplay mostly comes down to "button-mashing" (rapidly pressing buttons), which is actually one of the genre's biggest appeal, since it is relatively simple to play and any gamer can easily get into it.
﻿﻿


Batman Returns was released in 1993 and was developed by Konami, one of the top makers of arcade beat-em-ups at the time. The game has similar gameplay to Final Fight (developed by Capcom), which is one of the more popular beat-em-ups back in the early 90's. The player takes control of Batman and goes through 7 stages battling clowns and other freaks from The Penguin's Red Triangle Circus Gang. Batman is able to punch, kick, and throw enemies around. He is also able to use the Batarang to momentarily stun enemies. He may use test tubes as well, which act like bombs that take out every enemy on-screen. The test tubes are limited though, so their usage is only ideal in desperate situations or during tough boss encounters.

Batman faces a number of bosses through each stage- all of which are characters from the movie itself. The main antagonists are Catwoman and The Penguin. Both villains  show up multiple times during the game, with The Penguin being the final boss.
﻿
﻿﻿

The game mixes things up a bit by adding some side-scrolling platforming sections in some stages where Batman uses the Batarang to hit enemies. He also occasionally needs to jump from one platform to another, sometimes with the use of the grapple gun. The 5th stage of the game consists entirely of driving and shooting down enemies with the Batmobile. These little things add some variety to the somewhat repetitive (yet still fun) beat-em-up sections of the game.

The game makes good use of its movie license by using some of the same music from the movie. The original tracks in the game have a similar feel to the movie's music as well. Most of the stages in the game are based on settings in the movie too. There are also cutscenes before and after each stage which show some images from the movie. All these add up to a well-made movie-based game, something that isn't very common. 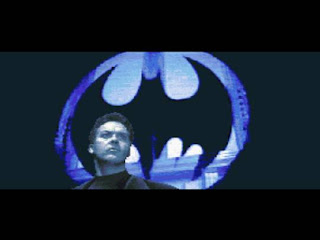 A cutscene from the game- This is a job for...Batman. 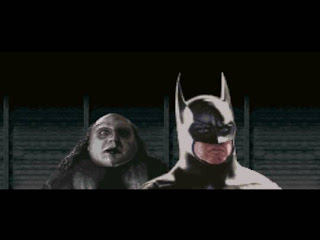 Some cutscenes are only viewable by finishing the game in the hardest difficulty setting.

Beat-em-ups are some of my most favorite games. I remember playing a lot of them at the arcades back in the day. I'm also somewhat of a "Batdork", so combining 2 things that I like (Batman and beat-em-ups) made me one happy gamer. I consider Batman Returns one of the best beat-em-ups on the Super NES, and it is in my opinion, one of the best Batman games around.


That's all for now, and always remember- the game is never over.