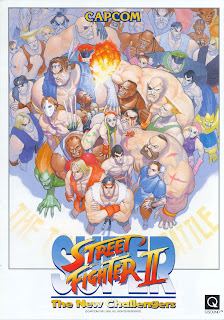 Super Street Fighter II: The New Challengers came out during the latter part of 1993. The game featured a new graphics engine, but still had that familiar SF2 look. All characters have multiple color costumes depending on what button is pressed when selected (at least 6 color schemes for each character, as the SF2 series uses a 6-button layout). Another new aspect was the scoring system which kept track of combos, first attacks, etc. However, the faster game speed that was introduced in Hyper Fighting was changed back to the normal speed similar to Champion Edition.

You can still play as any of the 12 characters from the previous games, but this time there are 4 new characters added into the lineup - Cammy (from England), Dee Jay (from Jamaica), Fei Long (from Hong Kong), and T. Hawk (from Mexico). This brings the total number of playable characters to 16.

The next game in the series came out in 1994- Super Street Fighter II Turbo (SSF2 Turbo). All 16 characters from the previous game were back and the faster game speed was back as well. The obligatory improved graphics, sound, and artwork were present too, making it the best looking SF2 game at the time. The major change for this version was the introduction of the "Super Combo" for each character. There is a "super combo gauge" at the bottom of the screen which fills up as players attack their opponents. Once it is filled, the player is able to perform a "super move" that makes multiple hits and does major damage to the opponent.

﻿SSF2 Turbo was also the first Street Fighter game to have a hidden character- Akuma (also known as Gouki in Japan). Players are able to fight him at the end of the game, but only if certain requirements are met (no losses and no continues). There is also a code that enables the player to play as Akuma. He has the same moves as Ryu and Ken, but is stronger and faster. He also has additional moves such as an air fireball and teleportation. He doesn't have a "super combo gauge" but his strength and speed compensate for that. He is one of the most powerful (and cheapest) characters in the SF2 series.


Hyper Street Fighter II: The Anniversary Edition came out in the arcades in limited quantities around 2004. I remember going into an arcade, being surprised, and getting excited seeing another version of SF2. I didn't know at the time, but it was originally released as a PlayStation 2 (PS2) game to commemorate the 15th anniversary of the Street Fighter series. It uses the same engine as SSF2 Turbo and gives players a choice to play as any version of the SF2 characters from the previous 5 games, as each character has slightly different abilities for each version of the game.